Since the pandemic began, I’ve been building up my desk to be the ultimate work-from-home space and now, I thought I’d share some of the gear I love the most.

As a writer and a video creator, I use a lot of gear for work, and this article covers the majority of it. However, I have a lot more, so let me know in the comments if you’d also like to see some of the camera gear I use and the studio space where I film. 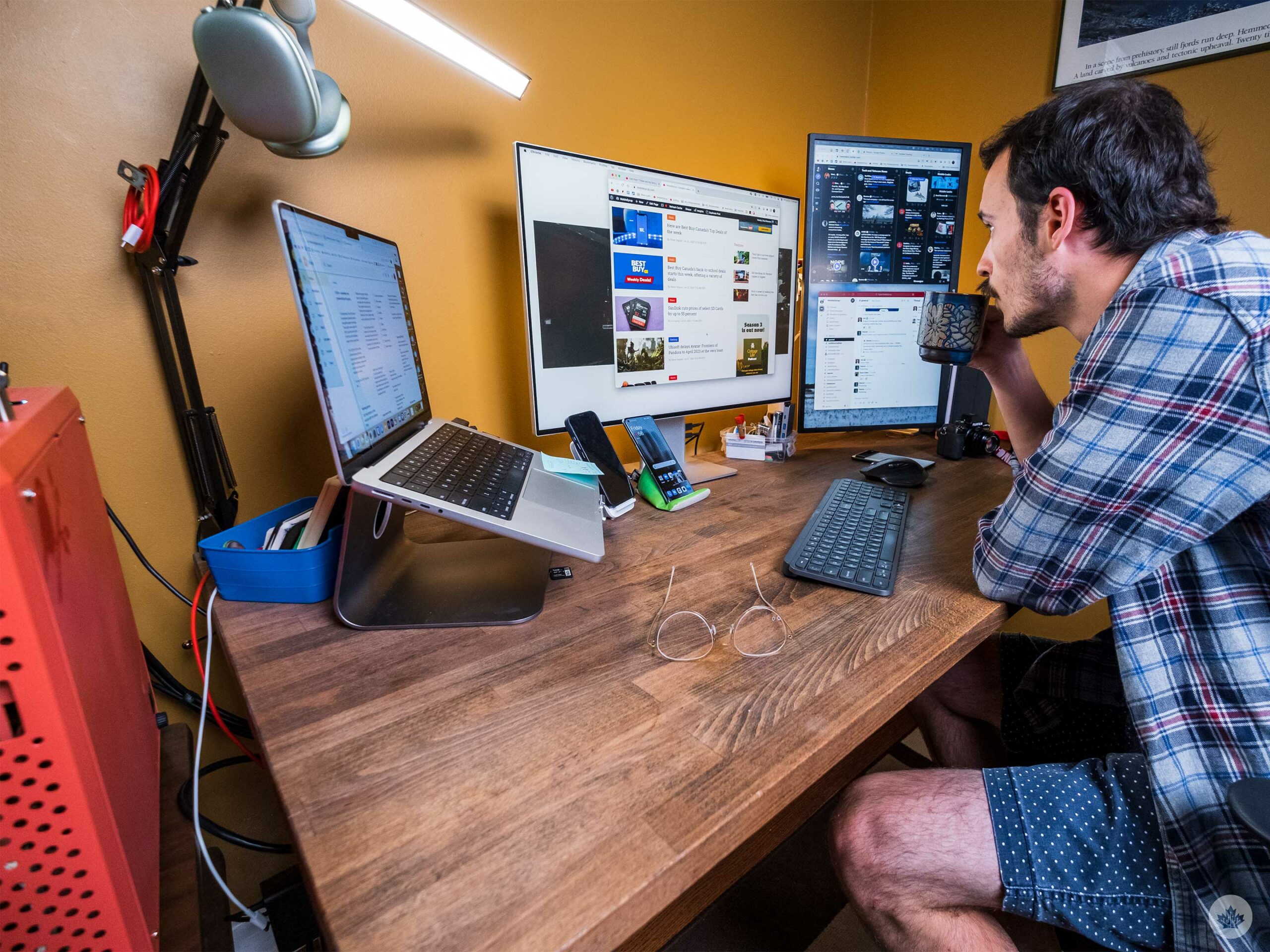 I use an Ikea wooden desktop that I’ve stained to be a dark brown. Last year I added some old legs from an Ikea standing desk, so now it has sit/stand functionality too. I like the no-nonsense design, how cost-effective it is and how sturdy and large it is. The top is starting to get scuffed up, but the nice thing about it being wood and not varnished is that it will be easy to sand down and redo in a few years.

When I added the standing legs, I also attached a cable management net that came with the standing desk, and it’s made it a lot easier to keep my cords organized while the desk moves up and down. 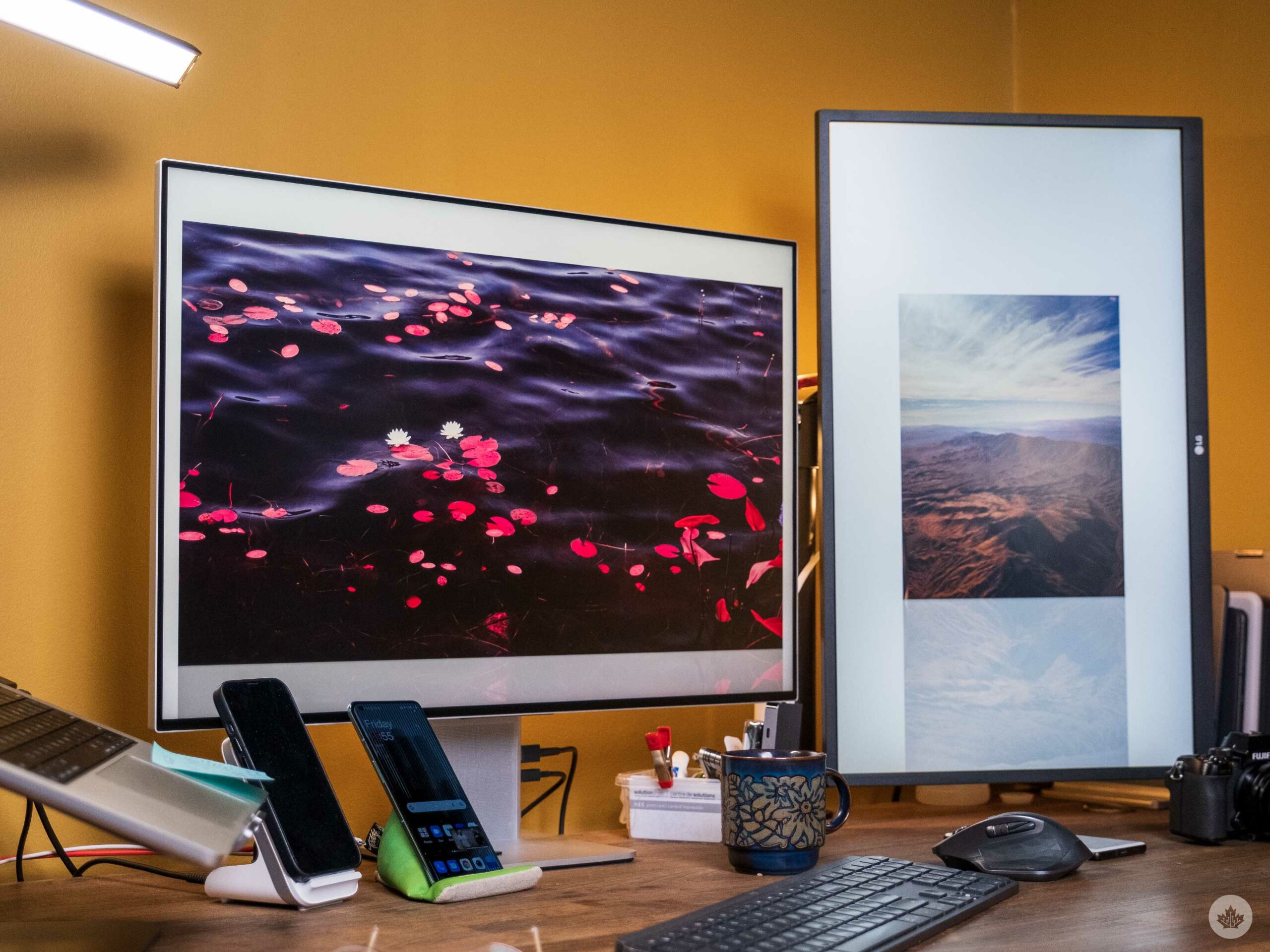 The main display at my desk is the epic Huawei MateView monitor. This giant 28-inch screen has a 3:2 aspect ratio and a 4K resolution. It’s a joy to use for productivity and looks stunning.

It’s not perfectly colour accurate, but it’s better than the majority of monitors, and for most of my work, it’s close enough. The other downside is that it can’t be VESA mounted since much of the functionality is built into the stand (at least it’s adjustable).

Inside the stand is a speaker set, a headphone jack, two USB-A ports and a USB-C with 65 watts of power delivery. This means that if you have one USB-C from your monitor to your computer, it will connect them as a display and charge your laptop.

My other display is an older LG 27-inch 4K display. I have another one of these since I liked it enough, and a couple of times per year, it goes on sale for $350, which feels like a fair price for a 4K display with decent colour accuracy. Again, it’s not perfect, but it’s 10-bit and vibrant enough for my liking. I also keep this one positioned vertically, and usually, my chat apps and Tweetdeck live on that screen. 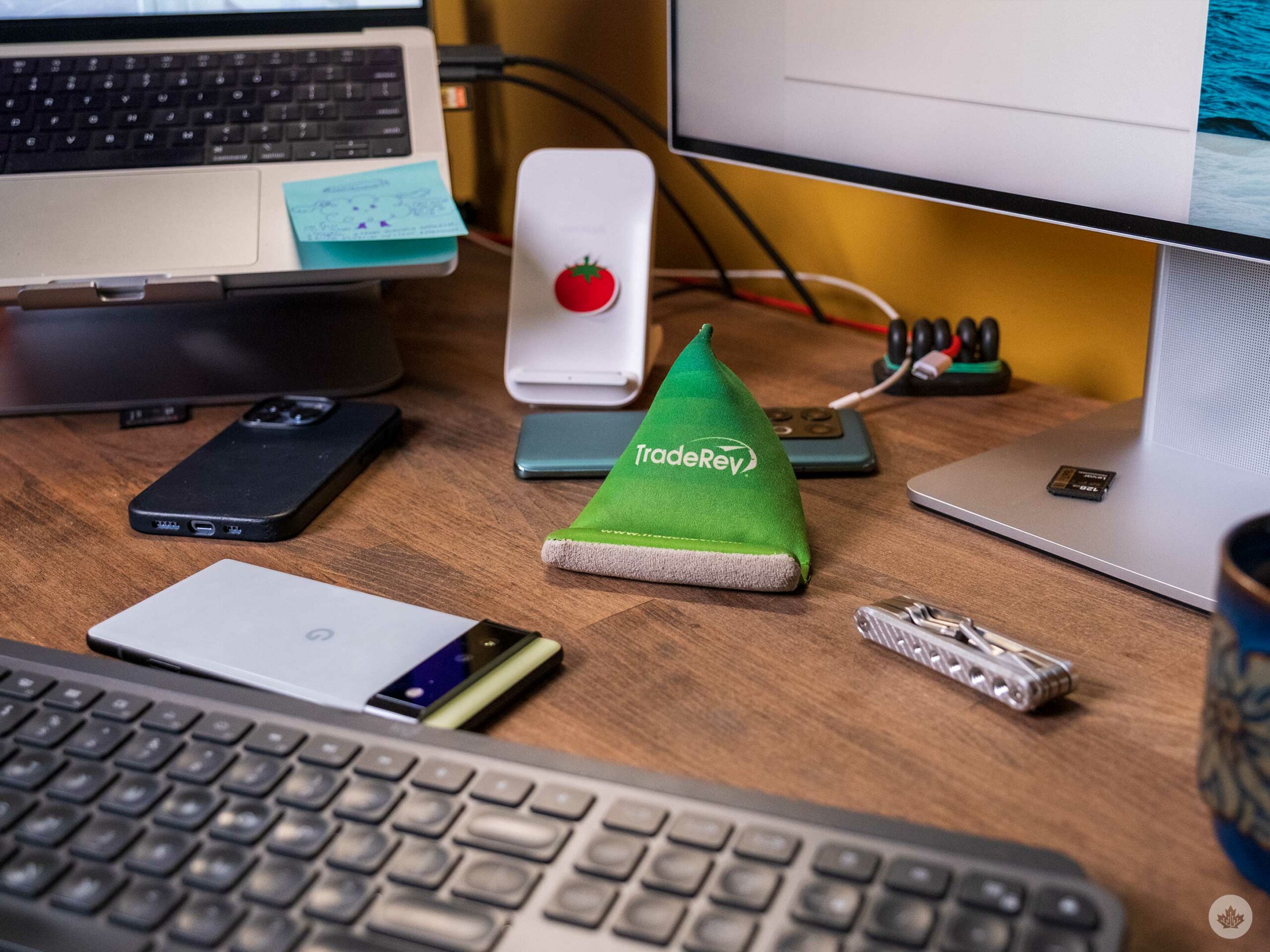 For charging, I keep a OnePlus Wireless charger on my desk since it’s sleek and keep my phone positioned so I can easily see new notifications. Beyond that, there is usually a single USB-C and a lighting cable dangling off the side of the desk somewhere to charge other phones, and my AirPods Max, which I use at my desk when video editing or chatting on discord. I’m less picky about what brick my iPhone cable goes into since it can only Fast charge at 18 watts, but my USB-C is usually a OnePlus brick and cable since it can fast charge OnePlus phones up to 65 watts and other devices up to 45-watts. To power everything on my desk, I have a power bar zip tied to the leg. It’s a little janky, but since the bar raises and lowers with the desk, it helps with cable management.

I use a Quirky cable organizer to organize cables on top of the desk. It’s plain and black, which is a little boring, but it more than makes up for that in functionality. I’ve found this model to be the perfect size/weight ratio, so it’s heavy enough to hold cables down without needing to be secured to the desk permanently but still small enough not to be an eyesore. The fact that it’s not permanently attached to the desk helps a lot too.

To the right of the cable organizer is a little bin that I got from the dollar store, which holds the most random assortment of things I have no excuse for. However, there’s currently a convenient SmallRig camera tool that I use to mount cameras to tripods and fix other things. My travel SD card reader and main USB-C dongle live in there too. The small reader is handy to use with the iPad Mini or Air, and the larger version I used to use a lot more when I used other MacBooks with only a few USB-C ports, but since I’ve stepped up to the 14-inch Pro, it doesn’t get as much play as it used to.

My phone pillow is a prized possession. This one I got at a press event, but the tag says it’s from a company called Toddy Gear. I love this since I never have to worry about scratching my phone or desk or making noise when I move it around. Since I generally have a few phones in rotation, having a second phone stand on my desk is a must. 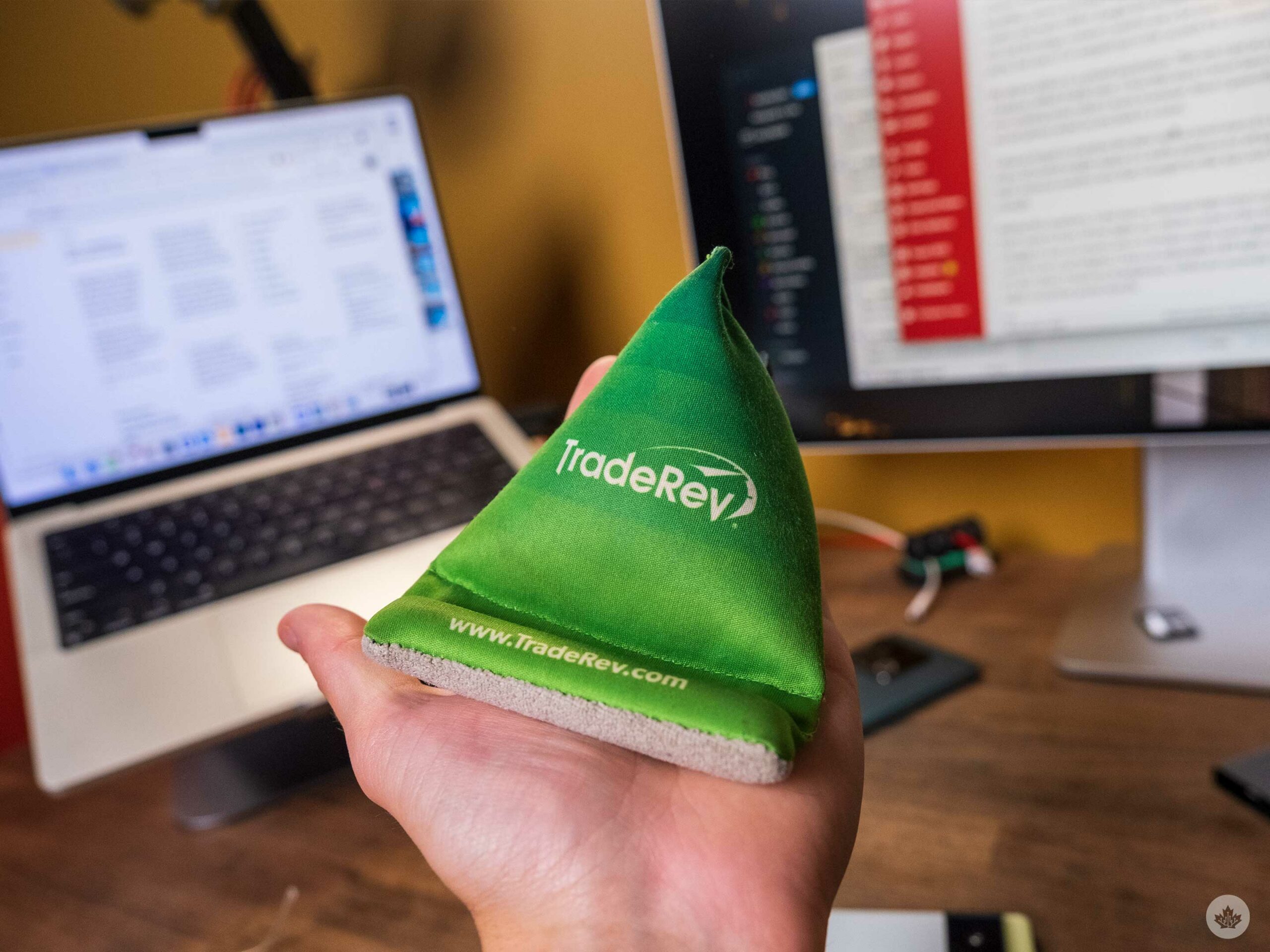 I almost forgot to mention the Rain laptop stand since it’s so standard, but I find it looks nice, and the heavy all-metal weight makes it a stable platform for all laptops. Holding up my vertical display is a very basic Amazon monitor arm that I bought for like $40, and it sucks to move, but it does its job well enough.

Behind the monitors, I also have a Nanoleaf light strip to give a calm ambiance to my workspace when I don’t want to have all the lights on, which is most of the time. This light strip is nice and bright, but it’s a struggle to use on camera since it strobes under most lighting conditions and shutter speeds. When I want it to be a lot brighter, I have an adjustable LED light on an arm. This little lamp is plenty bright, and it’s also where I hand my headphones, which are currently a pair of AirPods Max since I’m deeply entrenched in the Apple ecosystem. 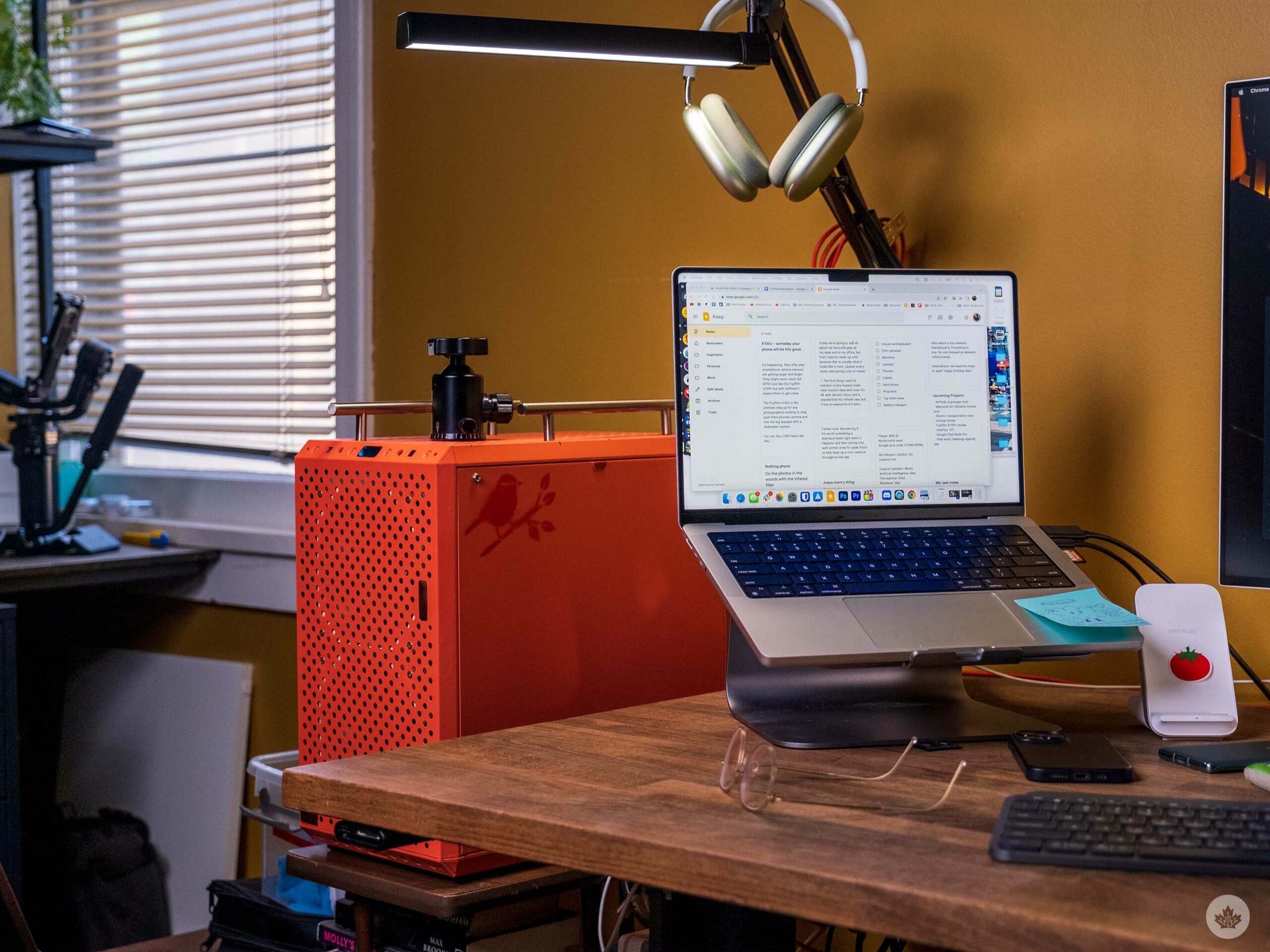 As a tech journalist, you can safely assume I’m a grade-A nerd and that there are a few computers on my desk at any time.

My main workhorse, for the time being, is a 14-inch M1 Pro MacBook Pro. So far, I love this machine since it’s portable and just a dream to edit video on. The screen is also colour accurate so having it for intense colour work is a dream come true.

My spec is the 16-core GPU model with 32GB of RAM and 2TB of storage. It might be a little overkill, but I wanted to invest in a computer that will be my main editing machine for years to come, so this is what I ended up with. I also chose the M1 Pro over the Max since the Pro supposedly has better battery life, and since I do a bit of travelling and writing, I still value portability and battery life quite highly.

Tucked beside my desk is my custom editing/gaming Windows desktop. I started my most recent rebuild of this PC at the start of the pandemic and just recently finished it off with a new GPU and a paint job. Inside, it’s running a Ryzen 7 3800x, 32GB of RAM and an RTX 3060. For the most part, it’s been solid, and ever since I outfitted it with all Noctua fans, it’s also silent, but it’s not the most reliable machine.

On my birthday last year, I added 16GB of extra RAM and that fried my motherboard’s RAM lanes at the time (as far as I can figure). After about three days of troubleshooting, I got it working again with a new motherboard, but it was never quite the same. The screen glitched, and other times apps and games would crash randomly. I was hoping the new GPU would solve this, but it only seemed to make the problem occur less frequently. Next on my list is to replace the RAM, but for now, I stick with the reliability of the MacBook and game occasionally.

Tucked behind my monitors are various Chromebooks, laptops, MacBooks and iPads, all held vertically by a heavy metal stand that I bought on Amazon. It’s nothing special, but it does help a lot with organization.