Leon Draisaitl is second in the National Hockey League scoring race, eclipsed only by his supernova teammate Connor McDavid.

Draisaitl is one of the world’s great hockey players. If the Edmonton Oilers are to ever win the Stanley Cup, big, strong and gutsy Draisaitl will most assuredly be every bit as responsible as McDavid.

Sign up to receive daily headline news from the Edmonton Journal, a division of Postmedia Network Inc.

He’s a two-way force, almost unstoppable both on the attack and in the defensive end when he’s bringing his “A” game, as he often does in the toughest of games against the most difficult of opponents.

There’s no real argument about any of the above.

But there’s also no real argument that as deadly as Draisaitl has been on the attack this season, he’s also struggled on defence. Oh, he started out strong, playing some of the best two way hockey of his career in October, but for the past ten games he’s leaked far too many Grade A shots and goals against at even strength.

When he’s off, we see Draisaitl slow on the backcheck and slow shifting off the ice , as was the case on Damon Severson’s goal in the New Jersey game. We see him tardy in making reads, as he was against Los Angeles late switching off with Warren Foegele, who had covered his man into the slot, with Draisaitl slow getting out to the point to cover off shooter Trevor Moore. When he’s off, Draisaitl tends to stray away from  basic defensive fundamentals, such as staying with his man, and keeping between his check and the Oilers net.

He starts to free-lance, relying on his brilliant instincts to try to guess where the play will go so he can pick off passes. But when he guesses wrong, he ends up in the Red Light Zone. What is this place? If you find yourself alone, skating on the white ice with the crowd roaring, not covering off any passing lane and not covering any opposing player, do not be troubled. For you are in the Red Light Zone and you’ve already been scored on.

It’s not uncommon for hockey fans and pundits to notice offensive and defensive slumps. All we need do is look at obvious stats such as goals and assists, numbers which have done a fine job of fairly and accurately representing offensive process and performance for 100 years. But it’s far more difficult to notice defensive slumps because we have no such obvious stats to rely upon.

At the Cult of Hockey we try to surmount this difficulty by doing video review of every goal for and against and Grade A shot for and against the Oilers, and assessing which players have made major contributions on each goal and Grade A shot. We’ve been doing this work since 2007-08 on goals and since 2010-11 on Grade A shots. This is far from a perfect method of analysis but it’s our best shot at getting things right. It’s our attempt to back up our opinions on players with more fair and accurate information than simply go by watching the games or relying on crude shot or goal counts when a player is on the ice.

I’ll also note the obvious, that Bruce McCurdy and I aren’t NHL coaches, executives, scouts or analytics staff, just avid and dedicated fans. I take no issue if others decide to put little or no weight in our assessment.

Draisaitl started out red hot as two-way player this year.  In his first eight games this year, he played some of the best 200-foot hockey of his career. He made a major contribution to 3.4 Grade A shots per game (15 min. ES) and a major mistake on 1.2 per game, for an overall +2.2 Grade A shots per game plus-minus rate. His performance was at such a high level, he was out-pacing McDavid just then.

I note that +2.2 Grade A shots per game is an excellent number for a centre.

Any NHL centre who is +1.0 Grade A shots per game has a claim to being a top line centre in the NHL.

In 2020-21, McDavid, a model of consistency was +1.9 per game and Draisaitl +1.0 per game, so McDavid at his supernova level and Drai at the level of a first line centre at even strength.

In his last 11 games, however, Draisaitl is at just +0.1 per game, the level we see from marginal NHL centres.

Last year he was at 1.2 per game, and the season before that 1.1 per game, so Drai is making almost twice the number of major mistakes than he usually does.

Let me admit something here — it’s no fun writing this kind of post. I’m a huge fan of the player and all he brings. His creates magic at the rink almost every night. He’s a monster of the two-way game, a courageous, fierce and able competitor.

But we do our video review work for a reason, to attempt to be fair and accurate in assessing players. We often criticize bottom-pairing d-men and third and fourth line wingers when they fail to measure up. I see no one sparing the feelings of Jesse Puljujarvi or Kailer Yamamoto or Evan Bouchard in the criticism department just now. In fact, I too often see the opposite, some unrestrained and harsh critiques of this or that player.

I’m not for savaging players, but I am for fairness and accuracy, and it’s in that spirit that I make this critique of Draisaitl.

He can play better two-way hockey than he’s doing just now. He can bear down and be a killer in the d-zone, as he so often demonstrates in three-on-five situations (where his brilliant reading of the game is more of an obvious asset).

Of course, Draisaitl will get it together in the d-zone again. He’s been ticking up the last two games, especially against Vegas where he was skating and checking like it was his religion. I have no doubt we’ll see more of that. 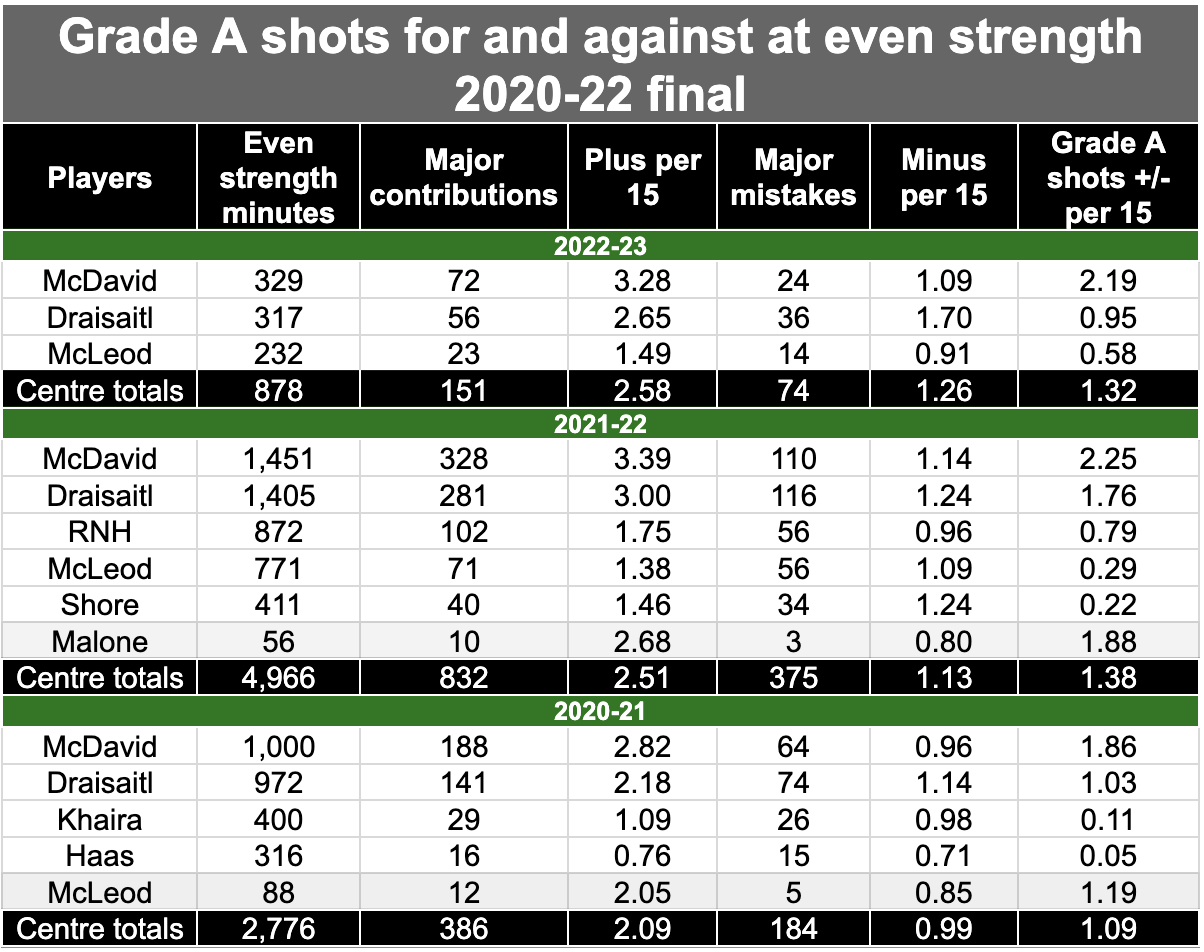 STAPLES: Will anyone be able to fill Kane’s skates?

McCURDY: McDavid’s overtime heroics lead the Oilers to a 4-3 win over Vegas